B McCullers
Back to Blog

Healing from hot spots became a priority when we adopted Mr. Boots, a 17-year-old domestic shorthair cat living under the house we bought. Mr. Boots was afraid of everyone and was covered with sores and bald spots.

What are hot spots

Hot spots are also known as pyotraumatic dermatitis. They can be caused by fleas, mites, allergies, bacteria, or fungus. Starting from incessant licking, chewing, or scratching, hot spots are in response to a painful or itchy sensation. The results are areas of redness, hair loss, oozing and painful sores. Most often hot spots occur on the trunk, base of the tail, outer thigh, neck or face. Dogs are usually affected, not cats, making Mr. Boots an oddity.

Before applying anything to Mr. Boots’ hot spots, I had to gain his trust. He was skittish and reluctant to let me get too close. I began to sit with him while he ate and eventually was able to scratch his head and chin. Once he became familiar and comfortable with me, I began to work on getting the hot spots under control. 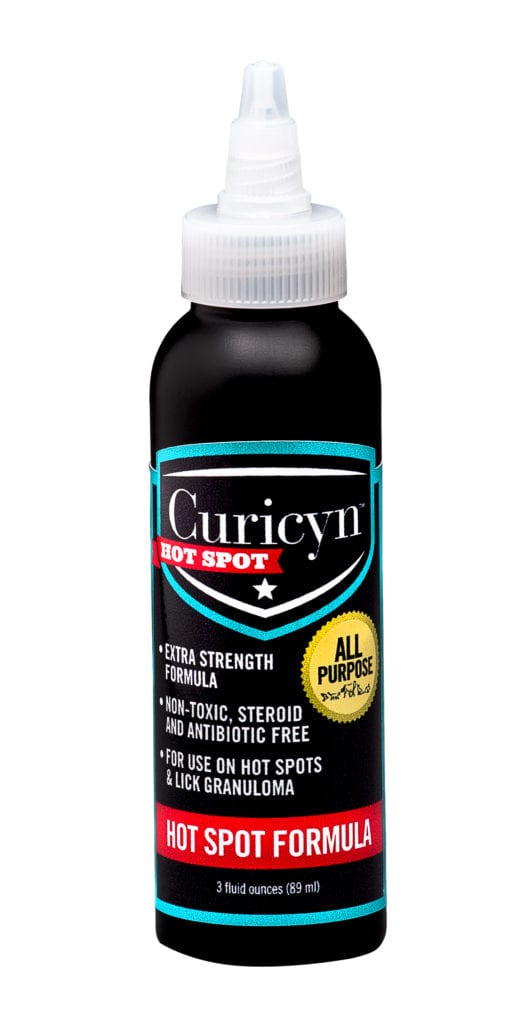 When Mr. Boots finished breakfast and dinner, I would coat him down with Curicyn Hot Spot Formula. It quickly became apparent that Mr. Boots did not mind having Curicyn put on his sores. Sometimes the initial application would surprise him, but he didn’t try to get away. In fact, just the opposite happened. Mr. Boots would rub up against me as if to ask for more. It was evident that Curicyn did not sting or burn when I applied it. Most important, Mr. Boots liked it. Within a week, I was also able to apply Curicyn Wound Care Clay to the worst spots.

It took a period of approximately 6 weeks for all the hot spots to disappear and for the hair to start growing back. Mr. Boots is now hot spot free. His hair is thick and there is no evidence of any bald spots. Thank you Curicyn for developing a product that aided in the fast healing from hot spots. Mr. Boots is now back in action grooming and napping without scratching.